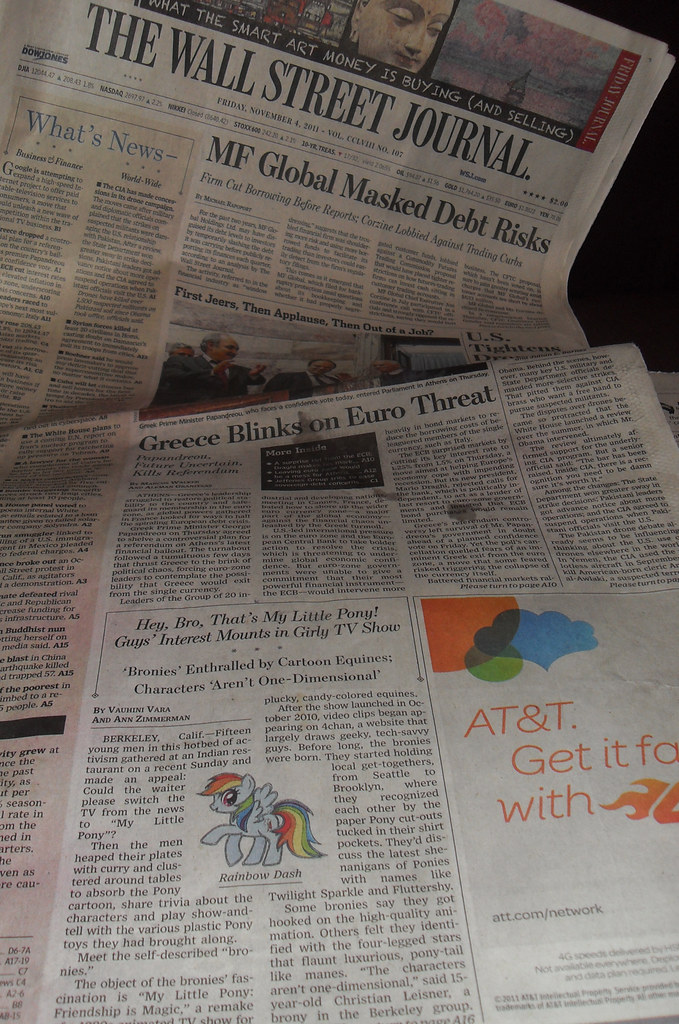 Sorry if I broke your page but my brony meetup and the mention of myself as a "pegasister" are on the front page of the Wall Street Journal. I'm allowed to brag for one day :)


See the part about 4 "pegasisters"? That's me :) The Berkeley meetup was the meetup /I/ hosted!

Clear treat bags with a haunted house/tree printed on them. The biggest I could find
Pixie Sticks - representing Pinkie Pie
Smarties - I plan on rolling pieces of paper around them to look like the scrolls Spike sends to Celestia. Possible "fortunes" or quotes?
Hershey's Special Dark kisses representing Nightmare Moon
Milky way bars representing Twilight Sparkle
Skittles for Rainbow Dash
Eyeball shaped bubbles for Derpy
Puzzle erasers I'll put something pony on (fluttershy?)
Star Crunches & make a Luna sticker to put on them
And my favorite..... Glue sticks (Krastos the glue maker)

My sister and her boyfriend got engaged today so it seems appropriate to think back on my engagement. I remember Ben asking me if I would e free after class and I had actually made plans, but not till a little later, but they were kind of iffy anyway. I raced home from class so I could spend maximum time with Ben and asked what he had planned and he said nothing that was on a strict schedule. Weird. Not knowing where we were going I wanted to use the bathroom before we left. As I was doing my business the thought actually crossed my mind if Ben might be getting ready to propose, as we had been discussing it for several months. But I dismissed this and we hopped in the car. As we drove down the road Ben pulled into a little plaza and I spied an ice cream joint next to a jewelry shop. Mmmm, Ice cream! Until Ben took my hand and led me into the jewelers. So many things happened. Ben showed me the ring he picked out. I tried it on (the wrong hand!) and took it home. Then I made poor Ben take it back later in the week and get it made a half size smaller! Oh, and I was so shocked and excited we forgot to get ice cream on the way home!

Ben mentioned the other day that the best 4 cheese pizza he had (in the states) was at a French restaurant in Cleveland named l’albatros. Ben had worked a holiday gig at the restaurant along with a flutist and a guitarist. In compensation he got a free meal for two at the restaurant. Outside of new york it was one of my few fancy restaurant visits and I tried to order cheap since we weren’t technically paying. But the manager came over and told us to order a 3 course meal! I can’t remember everything we had (Ben obviously got pizza) but I do remember this amazing tarte with oven roasted tomatoes or something in it. It was divine and I think when Ben and I go back to Cleveland for out wedding this might be a good place for us to go just me and him for lunch one day. The albatross is supposed to be lucky and all!

Ben and I tend to end up visiting zoos and parks a lot. Ben likes the outdoors and nature stuff and I like taking pictures of things. We’ve visited the Bronx zoo, the Cleveland zoo, and the Oakland zoo. I think of the all my favorite was the Bronx because it was the largest though I also liked the baby giraffe in Cleveland. When we were at one zoo we were walking past a display where a kid rushed in and posed in front of the tapir exclaiming that it was his favorite animal in the zoo. Ben and I had mentioned kids in passing before but I remember observing Ben and seeing how he lit up with the kid’s enthusiasm. In that moment I knew I had a little glimpse of both what Ben was like as a kid, and how he would be as a father.

I appreciate that Ben is always good about trying new things with me. We played magic the TCG together, which turned out to be a bad idea since it was addictive enough that we spent more money on it than we should have. And Ben went to his first anime con with me too. It was a dinky little thing in Hayward with almost nothing to do, but I was surprised that he still seemed to have fun. He was also nice enough to sit with me at the artist alley table at a nothing convention, and though he got antsy pants toward the end, it was nice to see him sitting around and smiling and doing something a little in “my world”. It seems a little strange though. Ben introduced me to opera and musicals and I introduced him to Magic and Pokémon!

I know I would have never been brave enough to do many things in life if I were no being encouraged by Ben. If one day I am old and bitter I will never be able to say that Ben didn’t support me. I spent weeks and 3 failed attempts getting my driver’s license so I could drive the 45 minutes to Cleveland to see him whenever I wanted. I got on a plane and went to New York because of him. I’ve tried all new foods like Thai and Indian and probably even some other things. I cannot put into words how Ben has expanded my world. I’m so excited to be getting married and planning a family and just being together. I have a sneaky suspicion it’ll be like the plane ride. Exciting, scary, a little bumpy, and maybe at some points too routine and others too exciting but I’ll be glad for the chance to fly.

Ben had to grow out his facial hair a little for a part his was playing in a chorus the winter before last. I hate , hate, hated the scratchy not beard. Ben told me he grew out a bead once when he was younger for fun. (I think to impress/mimic his dad). He showed me a picture and it was really crazy looking! I don’t think I ever want Ben to have facial hair, but it is interesting how we can be so set in how certain people look. I tried to freak Ben out with some old pictures of me (few and far between as I was usually the one TAKING pictures) but he was not weirded out by my fuchsia hair. I guess this is a god thing. I think in a lot of ways Ben is less judging than me.
Collapse